•a single thread, a thousand stitches•

The bloggers' medium: in some ways, narrow. So obvious and immediate. Writing for strangers (and, well, the possibility that you are writing for no one), simplifies things. Particularly the weaving of personal history. Brevity reigns. Photos are necessary. The jump is necessary... 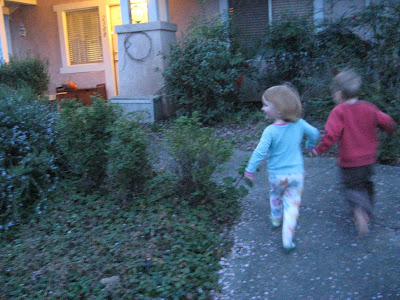 There are no limits. Not on time, or length, or syntax. Really. The above is a picture from weeks' past. Penn, bringing a joyful Tatum inside so they can have a "dinner date" with Amy (whilst Their Parents have the same).

Why does a blog feel so very different from a blank journal page, or even a blue screen dot-doc? Same return-key... same black square letters. Could just be me. But. I suspect most of us middle-aged bloggers feel this striking shift in vibe from pen to typewriter-tape to thick black return-key. This is our story, after all--it happened in our lifetime. Tab, double click, transmit. Letter-writing on steroids. This frame (The Blog) is still so new, and so simple--this method of logging our thoughts for public consumption. It humbles. This post could be published, retracted, refined, ignored. I'm coming out in favor of blogging, here (in case you couldn't tell)... even though there are now so many of us that we cannot possibly be recognized, renowned. It is enough to be recorded. I'll take on anyone's dismissive criticism of "blogging." This form is in fine working order.

Today: I want to write about my mother. (I know, I know: a resounding chorus of rolling eyeballs. Thank goodness self-deprecation is the industry standard at Half Assed Mama.) You don't know my mother, but I probably don't need to tell you I have many complicated feelings about her. There are hundreds of long-distance-fueled, age-exacerbated confusions. Frustrations that reach beyond the failings of memory (hers *and* mine) and eardrums. Sometimes, we lack a common language. She lives in New Hampshire, on the Eastern seaboard of the US. Just above Boston, four miles from the Atlantic Ocean, in the house of my adolescence. I live in Northern California, sixty or so miles from the Pacific Ocean, on the Western coast of the US. We are separated by 3000 miles (4828 kilometers). And more, it seems, sometimes. We have a family mobile-phone plan that allows us to talk freely... but I can't remember the last time I had a private conversation with my mother. She hustles my father into the room whenever I call, and together, they talk at the speakerphone. Our calls consist of me, repeating short, clipped phrases--"We're NOT sick anymore! I am HOME from work today!"--and them, trying to hear, comparing schedules, talking logistics, analyzing doctor's appointments. Often, I witness a conversation between my parents about the dryer and its ongoing repairs, or the mirror that fell off the door, and how they plan to restore it. If I were to hang up, it would take them minutes to realize.

I am my mother's only child, though she helped raise two sons from my father's first marriage. My brothers are dear to me, and I do not make the "half" distinction, except to illustrate our family structure. My mother makes the distinction. I suspect it illustrates some generational divide. Or a philosophical divide. I have family bonds with people I'm not biologically related to: aunts, and a cousin without whom I wouldn't be able to breathe. My mother? Not so much. Or, at least, not that she has revealed to me lately over speakerphone.

The last email from my mother promised a "fat package in the mail for Penn," her grandson. "Let me know how it goes," she wrote. The sanctity of surprise is of utmost importance in my family, so I understood her statement as Harvey-ish, not cryptic. I wondered what the occasion was. St. Patrick's Day?

My mother had told me she was working on a sweater for Penn, months ago. She'd wanted it to be ready for the fall, for Thanksgiving, for Christmas. It was taking a long time to finish, she said. Every time she brought it up, it was with misgivings. She wasn't sure he would like the color, she was worried about the size, there was a high possibility she may never finish. I sort of dismissed the whole thing. I generally abhor expectations, but also: the last known thing my mother had knit was a baby blanket. Soft but synthetic, it was eerily reminiscent of an afghan we knit together in the 1980s. I was six years old. We had just moved to a new neighborhood. I learned on a pair of slippery plastic needles, their shiny thumb-tack heads clacking faintly above the rain. I knit row upon row, sitting next to my mother on the couch in that transitional, dark apartment, while my father programmed and tweaked loudly-buzzing machines down the street, at his new workplace that looked exactly like a flourescently-lit Doctor Who set. The blanket, composed of a color scheme I fought mercilessly for, was pale green, pink, and yellow, with knee-jerk stripes in purple and royal blue. Escapist. And like most escapes, much better in theory.

The sweater my mother has knit for Penn is beautiful. It is the color of love (and I can say so, because I am the corny, no-holds-barred, co-blogging mother of a toddler in America). One or two bright purple flecks among all those blues, like the delicate veins at a baby's temple. It is the softest, thickest wool. The loose embrace of the collar made my Little swoon when he put it on. The sleeves roll up ever so slightly at the ends, meaning endless possibilities. Off to preschool he went, wearing this sweater. I'm worried I won't be able to convey to my mother just how much this means to me, and to the unfolding story of our family. Will I be able to convince her--really convince her--that Penn likes it? Maybe not. Then again, it's possible those thousands of stitches and months of meditation have already translated into all the appreciation she needs. 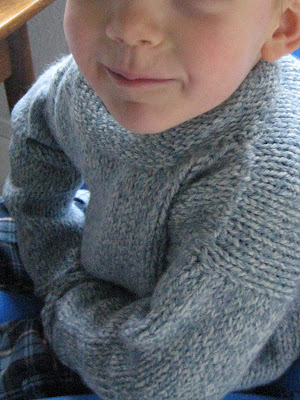 A Big P.S.: A word or two about the here-and-now: I have this friend named Amy. Without her, this blog would not exist, and neither would this essay. We've fallen into the habit of spending one or two days per week in each others' company, at her long table in the great yellow living room. If not for that space and encouragement to write, I would not be writing. (Nevermind that this blog itself is wider and more open than any blank notebook, and somehow squeezes the best little attempts at deathless prose from my anxious little heart...) The problem with art is that the artist needs space in which to create... enter, Amy. She helps me see that I have the space I need to write, even when she's not literally providing a wooden table for my laptop and coffee for my early morning neurons. There aren't enough thanks for that, not in any language.