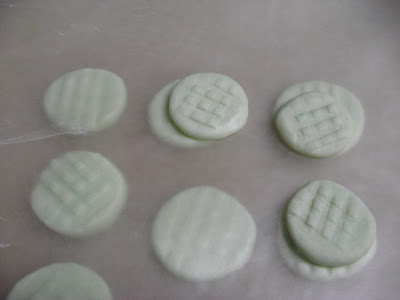 She was always up before dawn, in the impossibly dark morning, with the clock ticking timelessly and me, surely waking before anyone else... She was up, and dressed, and busy in the kitchen. My grandmother Audrey, maker of mincemeat and meringue pies and peanut butter eggs and holiday dinners and grandchildren. Every December, she made "mints," pale green and pink discs that melted away when you bit into them. She'd keep them on the stone patio behind the house, in giant tins. This year, I learned why she made so many--one recipe makes a zillion--and also why she got up so early. I tried to re-create some this year, and was most successful whilst the toddler slept.

I had this to go on: 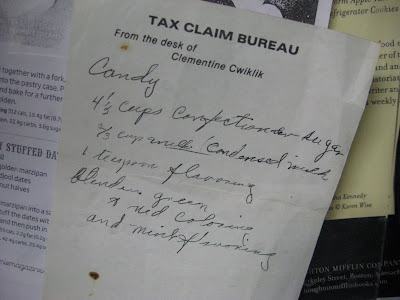 Sweetened/condensed is the only "condensed" milk I've ever heard of, so I reached for that. 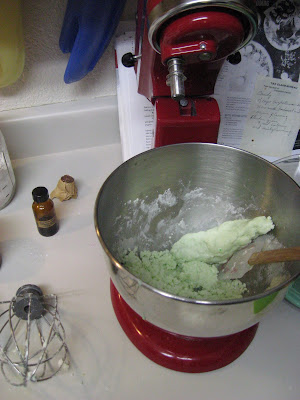 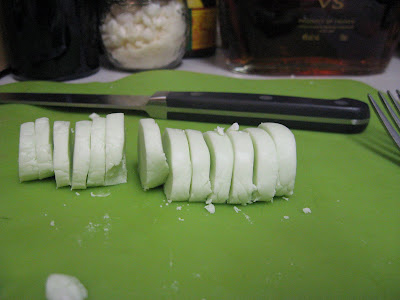 To get a log-able dough, I had to play around with quantities. More milk, more peppermint... My discoveries were
a) I think she meant vanilla flavoring the first time she lists flavoring,
b) blending the liquids together first makes everything easier, and
c) even if it doesn't look like a recipe, follow it to the letter. Trust.

My grandma called me "Pee Wee," because I was the littlest for 8 years, and slender as a toddler. I remember thrilling over her craft drawers, examining spearhead after feather after button. She was a troupe leader, and mother of five--all daughters. Costumes and everyday clothes were hand-made. A pint of ice cream was shared between seven bodies.

This morning, I am the one up before dawn. I can putter, and make, and watch the day stretch before me. It's Christmas, and I am grateful for everything: quiet, family, materials, memory. 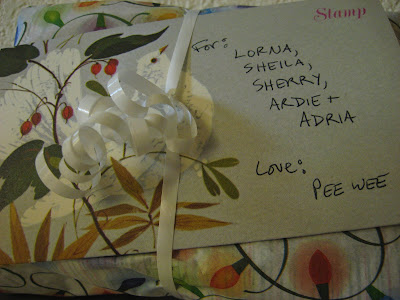 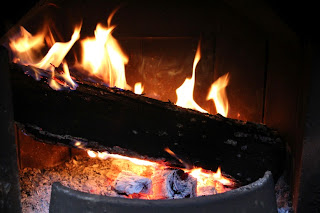 It's been rainy and cold for several days, and our central heat hasn't been working for a while. I finally broke down yesterday and called someone to come fix it, which they did with impressive speed, actually--like, within half an hour of my call.

(Are my husband and I the only homeowners who love our heating and air conditioning company? They've done a number of jobs for us since we moved into this house [and one in our last rental house, too, which is how we found them], and, no joke, I could write a whole entry on how lovely they are, from the owner of the company on down. They're super good people, and super good at what they do. [And for anyone local, that's Blake's Heating and Air Conditioning.] There's something wonderful about getting to support the business of people for whom you have that much respect.)

Anyway, it's not as if we were totally without heat--we have a room heating system (a mini split) for the largest room in the house, and most of the time, that's all we need to use--it provides ambient heat to the bedroom, the other room we use with any frequency. And then, of course, we have a wood stove, in which Brian started a fire yesterday, just before I broke down and called to have the central heat repaired. I was kind of miserable and unproductive thanks to the chill. The rain and the 40 degree highs don't sound so bad if you're living in a place with real winter, but even those temps can make it feel uncomfortably chilly inside--especially when it's wet outside--and the mini split system was having trouble keeping up. I love the cold weather, but I don't really want it creeping into my house.

Now we have real heat on and a fire going. And I still need multiple sweaters.

The fire is so lovely, I was inspired to play with the camera. I find the ash covered, red hot coals especially beautiful. 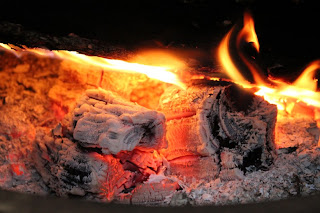 Not the best photograph, but below are the Italian cypress trees that stand in our next-door-neighbor's side yard, and I love to look at them through our skylights. They're incredibly majestic trees, and I thought they were tall when we first moved into the house, but every once in a while, I see them with fresh eyes, and I realize how alarmingly much they've grown in the almost four years we've lived here. 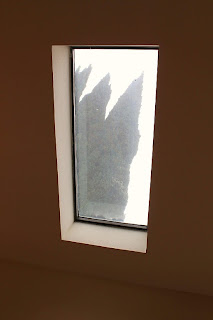 When we put solar panels on our house a few years ago, the solar company encouraged us to talk to our neighbor about taking the trees down, and she and my husband actually discussed it--she was totally willing to let us do it (she's a fantastic next-door-neighbor, and the tree thing is just the tip of the iceberg). But I wasn't having any of it. They barely block the panels, and it just wasn't worth it to take down such spectacular trees--especially since they amount to the only real view we have in this house. There are other windows, of course, but they don't really lead anywhere inspiring. (Want to see an inspiring view from someone's house? Check this out.)

These trees blow around in the wind, and they seem to be waving, or talking to me. They tell me whether it's windy or still outside, and they're accompanied by the music of these wind chimes my brother gave me. The chimes are large, and they sound deeply, nothing tinkly about them. More like actual bells. Dark, mysterious bells providing a soundtrack to windy days. 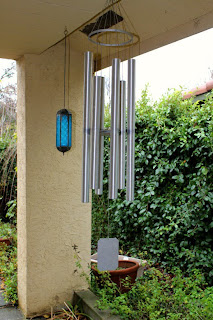 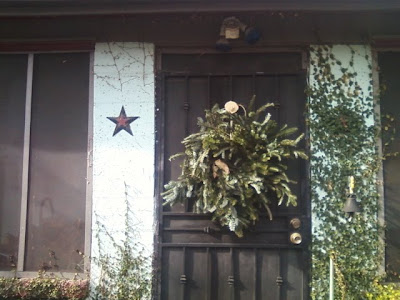 Satellite wreath-ery (from a visit to Atlanta)... 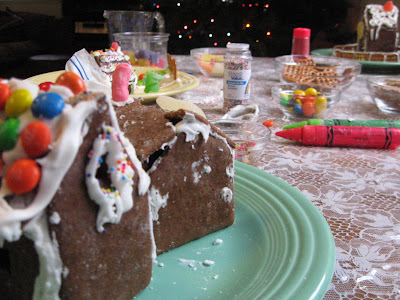 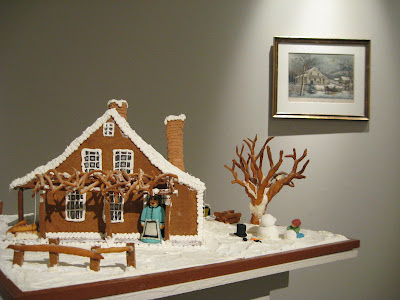 Gingerbread mastery (from a visit to Columbus; note the Currier & Ives model in the background)... 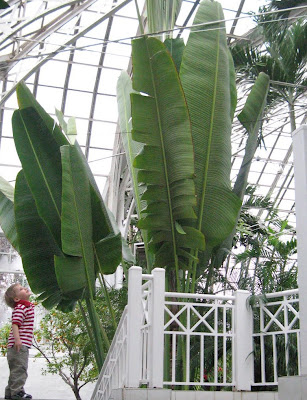 I make jewelry from silver clay, bronze clay, and a variety of other materials that inspire me. And yesterday, at this year's sale, I was actually able to get some pretty decent pictures of my things, which was lovely. Next step? Actually placing things into the empty, lonely etsy shop I created several years ago. (For the sad tale of why my shop is still empty and lonely, read here--but watch this etsy space, because with a camera this cooperative, there's no reason to leave the tumbleweeds in place any longer.)

And without further ado, and because I'm too tired and behind on other work to write anything more engaging, here are the gratuitous jewelry pictures. Enjoy. (I'm also too tired to add commentary to the pictures, but if you have questions, do ask! I'm happy to answer them after more sleep.) 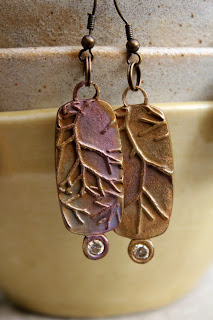 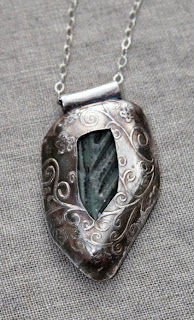 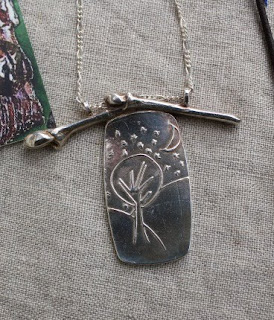 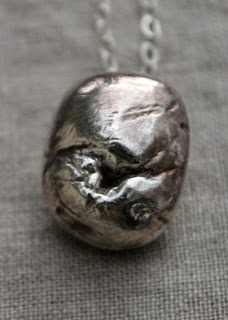 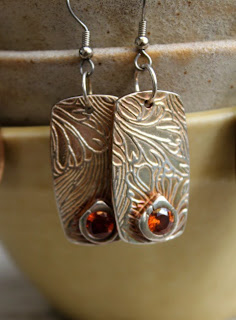 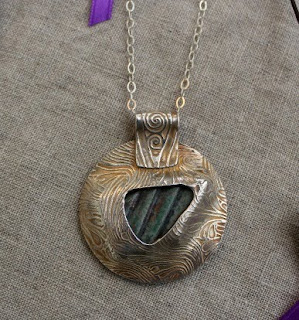 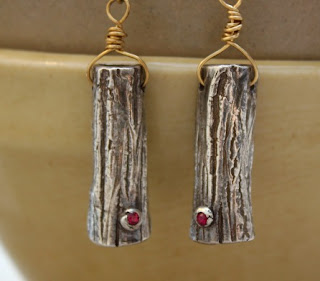 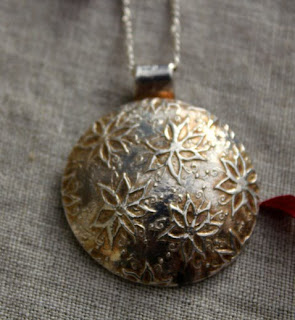 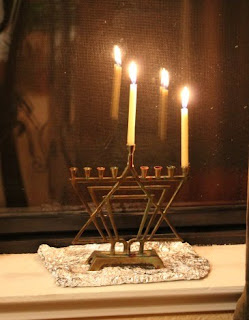