•the last days of winter• 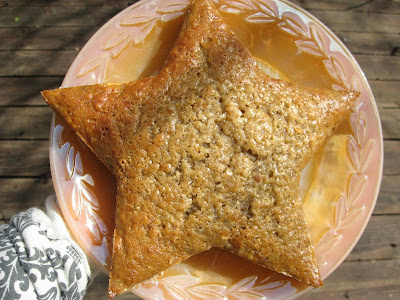 "Mom! What is that... thing?" [Fairy photos and hummingbird story after the jump!]
He has spied the cake-dome on the counter. I tell him I've made dessert.
"Yum!! I love it! Is it a pie or cake?" It is neither. (Banana bread made with an Amish-Friendship-Bread starter, baked in a cake mold.) It's also... neither Winter nor Spring, here. It suns when the forecast is rain, and rains on the lone day we're told to expect a reprieve. The wind tosses the trees, the lights flicker--and hold, this year!--and suddenly it is still and you can hear the night trains thrill and whistle. It is the gloomy kind of March that glows.

The snap peas that Abby and Chris gave us have been thrashed, first punched through by slugs, then trampled by cat, wind and water. The onions and sprouting potato are thriving (Troy & Penn found the latter in the compost and planted it in February). We're out one giant branch of the ornamental plum in the front yard, but the poor tree gets no pruning above arm level, so perhaps it is for the best. Yesterday, I eyed a cast iron woodstove on Craigslist; today, a trampoline. It is backyard season, in spite of the hormonal dips and spikes in weather. (The trampoline is an obvious choice, but wouldn't an old iron woodstove be dreamy in the out-of-doors? I ended up with neither.)

This was Penn's last winter as a toddler. We didn't make it to the snow, but we did ice-skate (in Sacramento). He made it to an ice hockey game in Columbus (before Thanksgiving), and we did manage several small gingerbread houses with frosted trim. We read Maple Syrup Season for the second concerted year in a row, and there was lots of pretend skiing and pretend skating, and questions about when Penn would be old enough to "skate hockey." I wonder if the two snowsuits will fit his four-year-old body. Will he like cross-country, or downhill skiing, or snowboarding? In ten years, will we snowshoe and winter-camp?

A few weeks ago, I took a walk by myself. It was one of the sunny days that cracked through the cold, and every living thing was out to stretch its lungs. I came upon a hummingbird, hovering about 12 feet off the path. I couldn't help but greet it out loud with a friendly hello, because... I am a supreme dork? The bird may as well have spoken to me, first. I stopped. Who wouldn't marvel at a tiny black thing with blurry wings, trilling and chirping in mid-air? As I stood, it rose higher. 16, 18, 20, 22 feet, then--snap! Gone. I blinked. Another hummingbird appeared! In exactly the same place! Astonished, I watched this one do the same thing: hover at 12 feet, then rise steadily to 16, 18, 20, then sweeeshttt. Where did it go? I let my jaw drop. It was only one bird. Rising and then diving atthespeedoflight to return to his sweet spot (above my head). At the bottom of each swoop, he gave a sharp tweet. A whoop of delight, really. The whole show, whoop of delight, repeat. *This* was why I took walks, back when I took walks, before Penn. Oh, alright, I was more motivated by weight-loss and fruit poaching than anything else. But still. To come upon a precision humm-diver, immersed in song and dance? I watched for many minutes. I'm sure I wasn't the only one. This had to have been about courting; some lady-hummer must have been watching. A bicyclist came by eventually, and startled the bird out of his loop. He retired to a branch. Well thanks, I said, clapping. That was awesome! He swiveled, revealing a riot of red on his neck. The ultimate head-nod.

And now for some pictures of my own little hummingbird, his magic wand firmly holstered at his hip... at Kaylyn's third birthday party, last Saturday. 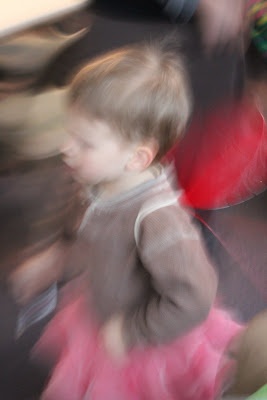 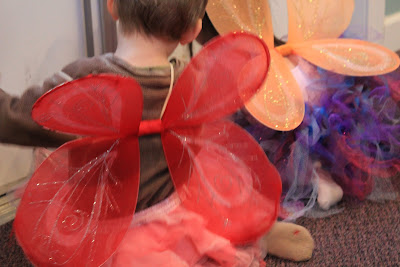