More (Oh, So Many More) Thoughts on Self Portraits

Do you all remember just about two weeks ago, when I wrote something about how I've always hated pictures of myself, and I'd kind of like to get over it already? 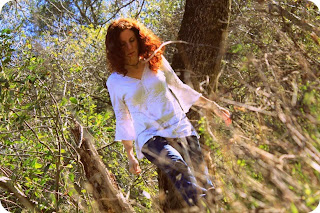 (Click on any of the images to expand them)
Yeah. I think I'm officially over it, and the class still has another week and a half to go. I also think I'll sign up for the next one.

I promised to write more about all the things this class is making me think, and although I'm still not ready to turn this into some polished essay on the subject, I really kind of want to write about it. And this is my blog. So this doesn't need to be a polished essay. (I know, I'm all about the revelations.)

So here, in no particular order, is an unpolished and random collection of thoughts on self portraiture. More or less just as the ideas gathered themselves in my journal over the last couple of weeks. And it's long. Really long. (You've been warned.) But there are pictures! And my grammar's not half bad, I promise!

1) I keep thinking about the words "image" and "imagine." The pictures I'm taking are often hitting me with incredible force--and it isn't about what I look like necessarily, but more about something behind the image. I wrote more or less the following in a comment on Vivienne's blog yesterday: As I look at the pictures, I'm having these visions of what I might be capable of, things that have nothing to do with my physical appearance, or with taking pictures (of myself or anything else). And the visions aren't anything I'm consciously calling to me--they're just these overwhelming feelings of creative possibility that stem from the pictures themselves. Amazing.

It keeps occurring to me that "imagine" is a more powerful verb than we give it credit for. Even when we're deeply committed to acts of creativity, I think we don't often hear the literal meaning the word "imagine" carries: That a mere image can call reality into being. 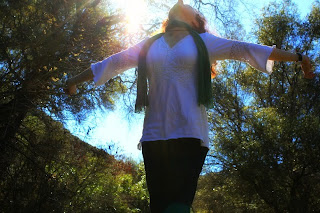 2) If all of that is true--that an image can expand our ways of imagining ourselves--what else can it help us to imagine? How can portraits of ourselves and other people stretch our creativity and help us to stop putting limits on ourselves and everyone else?

3) And really, isn't that just another way of asking how really seeing ourselves and other people can allow us to expand our visions of them/ourselves?

4) And on that subject, I'm blown away by the degree to which self portraits allow us to allow ourselves to be seen. There are so many elements to just this issue. One of them, it's been occurring to me, is that when we're the ones both in front of and behind the camera, we have all the power and control. We can tell the story we need to tell about ourselves.

I'm not entirely comfortable with this, actually--this "being seen" business. And it's also the thing I am probably most desperate for in the world. And suddenly, this class is helping me develop the power to say, "Here I am. This is who I really am." It makes me a little squirmy to post these pictures here, but I'm also pretty proud of them. Not necessarily as photographs (still know nothing about my camera! but it's a blissful ignorance!), but as images that tell a bit of my story.

I'm interested in how this differs for me from sharing my writing with the world--after all, writing too is a way of saying, "This is who I am." I think partly it's different because I've been writing for much longer than I've been taking pictures of myself, and partly because writing is so easily separated from my physical self. A portrait is about much, much more than my physical self, but it's intimately, inextricably entwined with that physicality as well, and that's a new level of vulnerability for me.

(And wow, do those last few paragraphs shed some light for me on my fascination with/loathing of/terror of performing. Topic for another day entirely. Welcome to my stream of consciousness.) 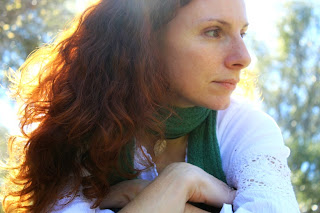 5) Which leads me to the concept of "bad" pictures of ourselves. I think my dislike of most pictures of myself has very much stemmed from feeling unseen--and by unseen I mean, not seen for who I am, not appearing visually in a way that meshes with who I feel like I am on the inside. And that's pretty much my definition of feeling ugly.

6) Which leads me to something else I keep thinking, as I look through the hundreds of photos taken by my lovely classmates: If you don't find someone beautiful in some way, you aren't really looking at them. Look harder. With the exception of the average axe murderer, everyone is beautiful. Everyone. Yup, you too.

7) And also: Once you start accumulating pictures that make you feel seen, all the pictures you thought you hated might start to look very different to you. I had occasion to look through some very old pictures of myself just in the last two weeks, during this class, and it was as if I'd never seen them before. As if every instrument I'd ever used to measure them had been recalibrated. Sure, some of them are bad pictures--but that's all they are. They don't reflect who I am--they're just lousy snapshots. And that's different. And it's not a big deal when I'm feeling seen in other pictures.

8) Let's take a look at the word snapshot for a moment. I happen to like it, and the momentary, fleeting, time-bound nature it implies. For the same reasons, I really like the word "capture," despite the fact that it seems to get flung about willy-nilly on the Internet. (Was "capture"--used as a noun--a real photography term pre-Internet-digitized-Flickr photography?) Anyway--it's fitting, I think. It's occurring to me, as I snap picture after picture after picture--in mere seconds, with no space in between them, just trying to keep myself moving the entire time--that a photograph is simply a freeze frame.

Later, after I download the pictures, I can "flip" through them on my computer, zipping from one to another very fast--like a flip book or an old movie reel--and I can start to sense how I move. How that richer, more nuanced, more fluid whole might be beautiful, even if the freeze frames just aren't working on any given day. (And I'm not an Ani Difranco fan, but I have to admit the final lyrics to her song "Evolve" apply beautifully here: "It took me too long to realize / that I don't take good pictures / 'cause I have the kind of beauty / that moves.") 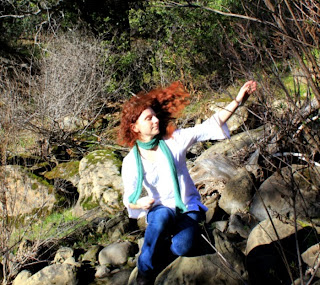 Me, magically making my hair...float?
9) However! I'm beginning to think I would argue that everyone can "take good pictures." Everyone has the kind of beauty that moves, I think, and everyone's beauty can be captured in those freeze frame moments if they/someone tries hard enough, sees them clearly enough. And as I said before, I'm learning that it takes a lot of pictures to get a few good ones. Can I just say that again? A LOT of pictures. Oh! And movement in the moment when you're actually taking the pictures is so important. It keeps you loose, natural, comfortable, and it gives the camera some of that moving beauty to sink its teeth into. 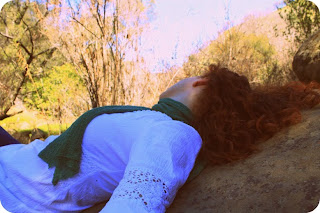 Me, not moving, just exhausted from
taking too many damn pictures.
10) The other thing about taking so many pictures, aside from starting to see how they fit together to make movement, is that they show facets. Whenever I see a lot of different photos of someone, taken over time, I'm often amazed at how different they look in each picture, and at the same time, how recognizable they become over the course of many pictures. I'm noticing that I look vastly different to myself in all my different pictures--though, taken all together, they're clearly making an overarching, collective portrait of me. The pictures represent all these facets of me--different moods, expressions, mannerisms. Things people who see me all the time in real life probably recognize unthinkingly, but I had no idea I consisted of so many tiny moments making up a whole. 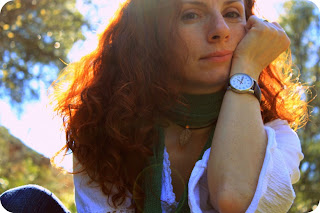 11) Some of the activities for this class have sent us out into the world to take pictures. And that's super fun. And also somewhat challenging, because--as you might imagine--people look at you funny when you're jumping around, snapping pictures of yourself and making funny faces at the camera. This is...daunting. And also, once you figure out a way to deal with it, kind of funny and fun. One woman in the class told us that she was simply telling people "I'm doing a project for a class." This, I love. This, I will use--now, during the class, and forevermore. Think of all the deviant behavior that can be excused this way!

(In fact, it makes me think of a fantastic sociology professor at my college, who used to teach a notorious-on-campus Sociology of Deviance class, during the course of which, students were sent out into the world to behave in some deviant manner of their choosing and then to note the world's reactions. Of course, students in that class weren't permitted to make excuses for their behavior. But I wonder if anyone ever thought of taking a quadrillion self portraits, say, on the train from Bryn Mawr to Center City Philadelphia?)

Anyway, whatever excuse you use, you quickly learn that you need to have one. And you still wind up feeling a little inhibited and ridiculous, even once you kind of find it funny to have people giving you weird looks.

And--here's a shock--my pictures from the days when I've felt more inhibited are not even close to as good as the ones from other days. They're not even remotely as open and free and really me as the others. And how fascinating that the presence of other people can so deeply affect how easily we allow ourselves to be ourselves. And how interesting that when we can honestly stop worrying about how people are seeing us, we're so much more able to offer them the opportunity to see us for who we really are. 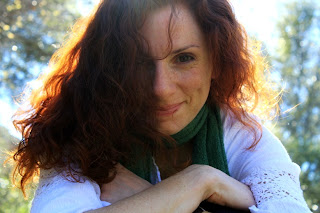