I am a half-assed gardener, among everything else. Yesterday, I put "plant winter crops" on a to-do list, and tried not to laugh. (My real goals for this pre-rainy season are to uproot the tomato plants and fold away the hammock.) Today, I yanked several otherwise-beautiful bushy things with irritating fuzzy burrs that live in the midst of a not-so-strawberry patch in our front yard. Why the not-so-strawberries? I don't know. These wood strawberries look the part, but taste like the absence of taste. The previous tenants preferred ground cover to food, perhaps. Anyway, I uprooted the flowering-bush-burrs, and also managed to sprinkle some scarlet flax seeds on a patch of... let's call it earth. This was long, long overdue. So overdue, it nearly never happened. The wind, oddly, has been a call to action for me. The past couple of days have been blustery, hot and fierce. Tornado-y. A tree fell on a car in the Coop parking lot yesterday afternoon, and by the look of it, today is all about one-upmanship. My response to the apocalyptic weather has been to bustle around in a flurry of putter. Tidy this, scrap that. Fashion lists, skip steps. I've been doing dishes, uploading photos, and procrastinating with greater zeal than usual. 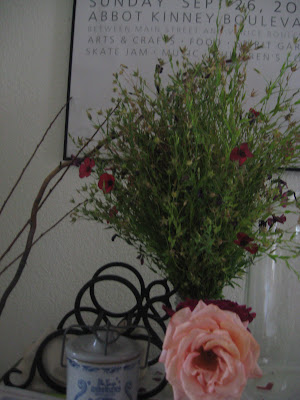 I've had this bouquet of scarlet flax flowers since May. My friend Airy cut them from her garden for a wedding I helped decorate, and when I ooed and awed my thanks, she said to keep them, let them dry, then crush the remaining pods and sprinkle the debris wherever I want flowers. They're essentially weeds, she intimated, and thrive by being ignored. My favorite kind of plant, I thought. I've been putting this off, but something about the heinous wind today struck me. Why bother giving the flax even a fighting chance? If the seeds are so resilient, why not toss them into the gale-force wind and see what they're made of? That, and it occurred to me and I had five minutes to just do it, or risk staring at that dried bouquet for years.

I am so proud of myself for this knee-jerk bit of gardening. And what is a blog, if not an enumeration of proud moments? Half-Assed Mama is no more than a list of achievements, really. How Amy And I Still Manage To Impress Ourselves. In spite of... everything. Last week, I so half-assed some apple butter, it came out like fruit leather. Gummy snacks, actually. The chunks would have made excellent rubber balls, if only I'd thought to shape the sauce, before over-baking the life out of it. I left the inedible apple-spackle in a glass jar in my brother's refrigerator; I fully expect to find it, still there, on my next visit to Schenectady. Oh, when I think of the gorgeous Cortlands that went into making that stuff... The size of a baby's head. The peels were so long. At the time, I congratulated myself for not making some sort of garland--"Kill the dream, Lis, kill the dream" sang Amy's voice in my mind--but now I wish I had something to show for Operation Apple Putty. I do have a photo of the scrapped apple peels. My nephew Simon is in the background, assessing the situation. 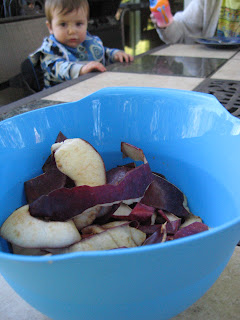 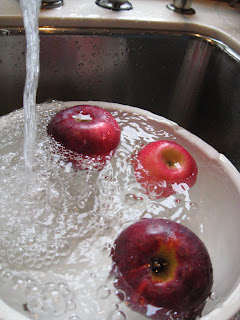 So my brother Art, the reason for my visit to New York, is a ridiculous over-achiever with two boys and a baby. He is one of my dearest friends, but, man. His idle speed is my race pace. 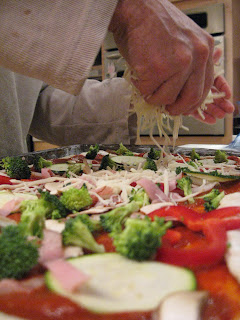 He managed to concoct three delicious dinners while we were there: pasta with gorgonzola cream sauce, homemade pizza with ham and veggies, and maple-breaded salmon, whatthef^%k. Plus separate kid-meals (which I applaud but don't approve). Three full meals at home, with green veggies each night, is a caliber I can barely manage with my one child and part-time job. Art is on it. Last week, he was also somehow able to rake and mow his gigantic yard, while working full time and manifesting an additional nephew for me. An achievement I maybe should attribute to my sister-in-law... but hey. I didn't know our brother Erik had a fourth baby due (yep, another over-achiever) in a matter of days, until I heard it from Art. Erik lives in Bronnoysund, Norway, which is remote to say the least, and so far away from any metropolitan area that his partner, Elisabeth, had to be air-lifted (a term I love, by the way, for conjuring an image of an elephant or a whale, hoisted by helicopter) to a hospital. The Cesaerian would have happened a few planned days later, had she not gone into labor. Which makes her an over-achiever, too! So. The happy phone calls from various grandparents came while we were in Schenectady, announcing Ingvald, at nearly 10 pounds. A fair bit smaller than his predecessor, Konrad, who was 12 and a half at the time of his (vaginal) birth. OverAchievers 'R Us. 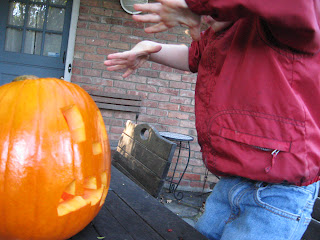 It was a great visit, even if I did feel like I was on mute the whole time. I'd wanted to hit a few Halloweeny notes... pumpkin bread, spooky cookies, jack-o-lanterns, spiced apple something. I managed all but the pumpkin bread, but it was still like I was standing, um, still. 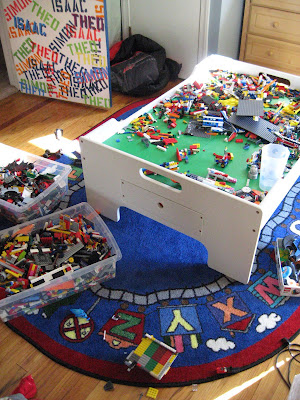 Everything pales in comparison to Art and Jess, who "manage" their three (3) boys, two (2) professional careers and approximately one hundred kick ass neighbors in their kick ass suburban neighborhood of, wait for it, Niskayuna*-- and all before 9:30pm, which is the time every night that they have dessert by themselves, because their school-agers have turned their lights off and their baby sleeps 11 to 12 hours a night. It was humbling, though completely lovely, to bask in their glow and enjoy a mildly rainy New York autumn-ber while Penn lost his mind over his cousin's Lego collection. 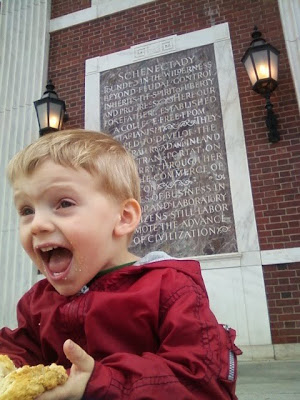 I do have a tendency to expect too much of myself. ("Ya think?" Amy would say.) While I didn't make it to Dunkin Donuts for a seasonally-appropriate donut and a bag of my co-blogger's beloved coffee beans, I did check out a Thursday morning farmer's market in downtown Schenectady, and an independent bookstore that charmed Penn with its childrens' nook and tiny chairs. ("Forklifts, Mommy!"). We got to talk to a city worker down a man-hole, and marveled at the hundreds of backhoes and asphalt spreaders scattered around the Stockade. Schenectady is one of those perfectly broody, Nor'eastern American cities that sparkle when you visit them in the fall. Blue-collared and cool, with rain-bright foliage and sunsets that leave the city on fire. 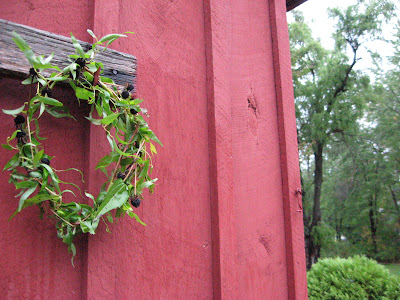 xox
*As if Schenectady weren't hard enough on the tongue.