(This essay is old, but I was thinking about it recently when I read Alice's post here, and then I found the pendant and used it for photo experimentation. [And I have to say, the photos are at least a whole lot better than they used to be!]) 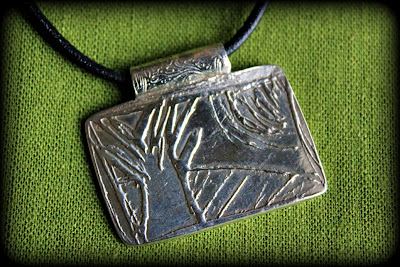 On the sofa next to me are no fewer than four journals of various sizes, all partially filled. There are also two sketch books (one large, one small), and a large pad of silky, sturdy graph paper that I like to use for taking notes and making lists and for sketching. In addition to the notebook pages that have been written or drawn on, each of these books has its own collection of scrap paper shoved into it, not quite fitting, getting worn and ripped around the edges that stick out.

I was looking for a list of words I’d written down at some point, thinking that I wanted to use them as the basis for a writing exercise. I scribbled them on one page or another, somewhere toward the back of a journal, or so I thought. But I currently have no idea where they are—I can’t find them in any of these books, and I can’t think of any other notebooks I’ve been schlepping around with me over the past year and a half. (I mean really, isn’t seven enough?) The rest of my notebook collection is neatly packed away in a box, historical documents now. But I came across my inspired word list just recently, so surely it’s in one of these living, breathing, and extremely disorganized books.

But if I can’t find the list, I have at least gotten a chance to look over a portrait of my brain as it really seems to work on a day-to-day basis, and I have to say, it’s a little distressing. For one thing, my journal writing has been less than regular of late. I know that my writing is better when I keep a more regular journal—and by “better” I mean that honest-to-God non-journal pieces of writing happen more often.

On the other hand, it seems that I never stop taking notes of one kind or another, even when the goal isn’t anything you could call “writing.” Example: My life is absolutely littered with tiny bits of paper covered in ideas about food. “Steamed carrots with vinaigrette/dill/etc.” says one. Another: “Greek style ‘yogurt’ with almonds and honey.” And then there’s simply: “coffee and chocolate frappé thingy.” The same page contains notes like, “get soldering stuff working,” and the somewhat cryptic-unless-you-live-in-my-head, “etsy!”

Other pages list the measurements of various beloved children for whom I’ve made clothing or plan to do so. Lists of spices my acupuncturist wants me to incorporate into my diet. Over-ambitious to-do lists that, I note, are in most cases still not completed. Almost dictatorial lists of life goals: “Learn to play the guitar/Make more of my own clothes/write more/learn to balance creative endeavors.”

The sketch books are just as overwhelming, with drawings for pieces of jewelry or clothing I want to make, various designs I’d like to turn into texture stamps for jewelry, not to mention all the things that aren’t sketches (more lists of food, more to-do lists, and the occasional more-to-the-point notes on soldering, polishing, forming a bezel, etc.).

So these notebooks are a mess, and I’m not sure what to think about that. My lack of focused writing frustrates me, and it’s super annoying not to know where things are when you want to find them again. I like to think I’d prefer to have one journal and one sketchbook and fill all the pages before jumping to new books. I’d like to keep my writing and sketching segregated from my to-do listing and recipe imagining. Surely I’d be way more productive if I had a place for everything and if everything were in its place.

And yet, just now I found a year-old sketch I wouldn’t have said I was thinking much about—it’s for a small, roughly drawn landscape pendant, with a tree in the bottom left corner, a hill behind it, and a moon in the top right corner. I hadn’t looked at it in months. But as it turns out, I took almost that exact pendant out of my kiln just yesterday:

I can’t consciously remember the words on that lost list, but maybe someday soon I’ll write something with them anyway.