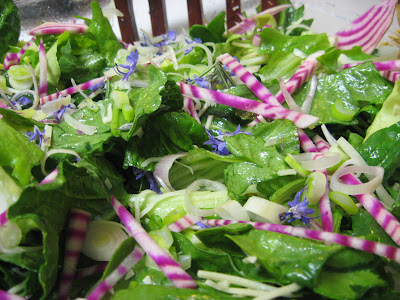 Last night, I managed to prevent my child from eating a piece of cinnamon gum before dinner.  Have you ever smelled that stuff?  The cinnamon oil (or at least what I hope is oil, but suspect is a chemical powder concocted in a New Jersey lab) wafts across an entire room.  Penn was hungry, and had already plowed through the chunks of vegetables I tossed to him while I prepped our meal.  Please wait until after dinner, I begged.  First I explained that there were ingredients in gum we didn't have in our cupboards, and that made gum suspicious.  Then I tried to illustrate the less-than-five-ingredients rule.
My boss invented this for her preschool classroom visits, and we'd been to a couple sites earlier in the week. (It's amazing, what talking to other children will do for a mother low on parenting pizzaz.) The Co-op does a series called Carrots in the Classroom, and when we talk with little ones, we focus on choosing healthy snacks.  I love working for a grocery store that makes a point to teach people to be wary of the very processed foods we sell.)

The gum's ingredients weren't even printed on the side.  Just these words: PHENLYKETONURICS: CONTAINS PHENYLALANINE.  (I am not making this up.)  Which brings me to my main point, folks.  For @^*%'s sake, eat only food. Simply put, if the ingredients list includes things you couldn't identify, leave it alone.  It's probably not food.  For kids who can count but don't yet read: if the list of ingredients is long, don't eat it.  It's probably not a healthy choice. For the sake of brevity, I won't even mention the amount of poop and dirt that's allowed in most processed food.

Penn finally agreed to set the gum aside, and promptly forgot it existed. I'm pretty sure if he'd primed his little mouth with that gum, he wouldn't have made it through dinner.  It pays to save your palate.  For dinner, he ate raw broccoli romanesco with bean dip, and enough of my rainbow pearl cous cous with turkey, beets, rutabaga, leeks, purple carrots, cilantro & lime to make me proud.  Our dinners are not always that colorful; Thursday happens to be the day we pick up a veggie basket from the Student Farm, and I have the day off from work.

Talking to Penn directly and honestly about food and the giant companies that want our money seems to get good results.  He understands that the people who make Transformer toothpaste and brightly-colored candy are not trying to keep him healthy--they're trying to get his money.  Penn still eyes things that shimmer with phenylgarbagol.  But at least he seems resigned to my reasoning, which is basically to be wary.  To pay attention to the fine print.  So far, my kid eats at least a sizable percentage of real food in his diet.  Yesterday's after-school snack options were date & cashew "turtle," a homemade granola bar, or a juicy apple.  He chose the latter.  This morning, I put fried eggs (from our chickens) on little mounds of brussels sprouts cooked with leeks and apple.  He didn't lick his plate clean, but he ate his egg and some veggies, too.  I tucked a bit of raw goat cheese under each egg for good measure.  I love greens and eggs for breakfast, and am grateful that my family appreciates them.  Well, maybe they are simply  tolerating the trend.  Doesn't matter. Veggies are getting in there, and a small boy's palate is being trained.  Food is education.  Dot com.

I was visiting with a friend yesterday, and she stated her family's simple rule: the girls get the same healthy food as the rest of the family, three times a day.  Sometimes, they go to bed without supper, if they choose not to eat. If hungry, they eat. We chatted on about the odd dichotomy of our culture: wealth plus ignorance.  There are so many snap-open-a-lid, snip-off-a-corner, reheat-and-eat choices in America; we're basically encouraged to camp at home. And there are so many illusions and deceptions regarding the ease of "food," the health and purpose of food, the cost of food.  And then there's the smoke-and-mirrors marketing of everything. The short-cuts every food company takes, regarding quality.

In the end, hold up an orange. How many ingredients? Now hold up a fruit roll-up. Which one contains fruit?  The answer won't shock you, but it's a pretty big surprise to a four-year-old when the word "strawberry" and the picture of a piece of fruit means absolutely nothing.
Posted by Lis at 1:30 PM