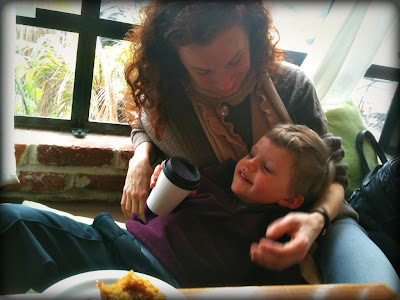 Penn and me yesterday, on a coffee date with Lis. Photo by Lis.

Last week, with a little nudge from a friend, I decided to choose “miracles” as my word for the year. As soon as Julie suggested it, I felt pulled by the word—intrigued, delighted, nervous. It fit well. There’s a lot behind that word for me, and I sat down to write about all of it this afternoon, but I got overwhelmed pretty quickly. There are so many miracles from this past very difficult year, so many people who were involved in creating those miracles or in helping me to see them. But it’s my word for the whole of next year, so I have a feeling I’ll have plenty of opportunity to write about it—no need to get it all out now.

Still, as I wrote and wrote and tried to spin out all the threads of all the miracle stories from my year, one little story popped out at me, so that’s the one I’ll tell you now. Maybe I’ll tackle each story in its time—little piles of straw waiting to be spun into gold.

But this one is about Penn, Lis’s (and Troy’s!) amazing, beautiful little boy (the toddler behind Toddlerblog over there, for those of you who are new here). And I think this story says just about everything you need to know about what it is I'd like to invite into my life by choosing this word.

The morning after I ended my marriage, I moved out of my home and into Lis and Troy and Penn’s spare bedroom. They welcomed me wholeheartedly. Penn and Lis greeted me at their door, and Penn was clearly concerned and full of questions. He wanted to know why I didn’t want to live with B. any more, and I had to tell him that was a really good question, and it deserved a really good answer, but I wasn’t sure how to explain it to him just at that moment, and would it be okay if I thought about it and gave him an answer later?

And he said yes, and then he asked me if I was still sad (Lis had told him I would be, and he could see I’d been crying), and when I told him yes, he came over to me and gave me a hug that made me cry even more. Because the hug he gave me was not, in any way, the hug of a not-quite-four-year-old child. It was the hug of a soul-level friend, a friend who understood at the deepest level that I was hurting. It was the hug of someone who was caring for me in exactly the way I needed to be cared for in that moment, and it was easily the most awe-inspiring, miraculous hug I’ve ever been given.