•everything ripe at once• 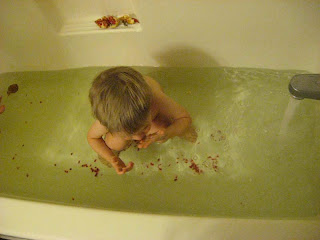 Biking past a pomegranate bush the other day, I almost wiped out. Split skin? Really? It was the first day of Autumn of this cool, removed year, and everything has been late in 2010, so I shouldn't have been surprised. I suppose I just forgot that 'late' doesn't mean 'never'. I've been watching the pistachio trees like a hawk, and they are just now coming ripe. The blush on the nut-hull is deceptive, so you have to feel for a plump quality, a varicoscity to the oval that signals the inside shell is split and ready. Until the pistachios puff up like that, there's no use picking any; the husk won’t pop off, and the nut will stay sealed like a chuffed clam.


The pomegranates have begun to split, and it seems like all of a sudden. The Leaf-Footed Bugs are mating with fervor, as though to underscore my discovery. Everything is ripe, and I almost missed it. Isn't that how it always goes? We are paying attention, paying attention, paying attention and then--whoops! Rug out from under. Apart from those abhorrent bugs on top of bugs, the pomegranates seem to be having a good year. The quince are also happening; I discovered a long hedge row of tiny globes a few blocks from my house. I threw some in the oven this morning as an experiment. Not sure they're edible, but they smell nice, and are more manageable now.* There are jujubes; tiny date-like apples that are so sweet this year, they're almost better green than wrinkely-ripe. Anyway, they ripened first and I couldn't wait. This week, I swear, everything. And still more grapes, tomatoes--fruit everywhere. I washed my hair four times, and still had to comb out a dreadlock. Fig milk, pistachio sap. Pine-pitch cowpies on the bike path. Another experiment: save that stuff for the campfire.

To celebrate the Equinox, my toddler had a pomegranate bath. It was really more of a way to break up the afternoon (and save a tremendous load of clean-up), but it happened to be the 23rd. Safely under water, he tore apart purse after jeweled purse. In between seedy mouthfuls, he floated boats of membrane. I took advantage of the opportunity to give him a haircut.

If you know another way to avoid peeling and coring quince, please advise.