•a man, a plan, a canal, pandemonium• 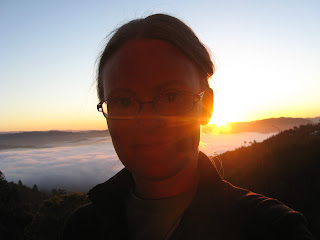 Perhaps against my better judgement, I watched a natural disaster documentary last night.
Not what you should do before sleep.  Tsunami: Caught on Camera (2009).  It was a good documentary and relatively gentle, still.  As a general rule I don't recommend watching that sort of thing.  After, I had a  conversation with the Doctor we probably should have had ages ago: where would we look for each other, if something unimaginable happened?  Head to wherever Penn was, of course, and get him.  Then look for each other, first at the Common House (part of our adopted co-housing community), then at the Co-op, then at the house of a UC co-worker, perched on very high ground.  The Doctor and I agreed, once we found each other, we would not split up as a family.  Even if the danger seemed past.   And then, we turned back to our respective laptops.  Eventually, we went to sleep.  (We still don't have a will & testament, either.)

We didn't bury money, or load backpack with supplies. We didn't even make a generic plan that could be applied if we were not in Davis.  And that is because... well, in the light of day and the glare of this blog post, that seems like an omission. But having any conversation about a disaster feels silly.  Sensationalist.  Certainly a knee-jerk reaction to the Boxing Day Tsunami film.  Everyone says there's no earthquake scheduled to take down Northern California.  We're fine.  (I still boned up on earthquake preparedness, this morning.)  So what were we doing last night, hashing out an a, b, and c location?  Planning for something we can't anticipate.  Catch-22.

There must be a middle ground between snorts of laughter and full-on armageddon-itis. Some sort of... Half-Assed Survival Plan?  I need that.  No hoarding of water, but perhaps an understanding of purification tablets.  And where to find them in a pinch (or how to make them, a DIY-ers dream).  How to dig a well.  How long to boil water, and how best to start a fire.  Shame on you, Harvey, you should already know those things.  And you should re-up your CPR credentials.

There's a sharp sliver of me that gets excited by disaster scenarios, and there's nothing unique about that. The potential for ingenuity, for resourcefulness, for the satisfaction that on-the-spot problem-solving brings--it is universally appealing.  Trace those thrills back through the canon of American childhood: The Black Stallion, Dove, The Island of the Blue Dolphins, Julie of the Wolves.  The Little House series.  The Life of Pi.

This year is the 100th anniversary of the sinking of the Titanic.  The retelling of that horror is mesmerizing.  There are so many angles.  Layers upon fascinating layers of a scab.  Penn demanded, for weeks on end, to read and re-read excerpts from the National Geographic with the breaking ship on the cover.  Even at four, and without a clear understanding of "fathoms" and ice-cold ocean, he is fascinated.  "Is that the Ice Cube?"  That scraped a ship into the deep, yes.  And here we are reading about it on the couch, one hundred years on.  Looking at a picture of a leather shoe, found miles under the sea.  Imagining the calm, and the chaos, of those early morning hours.  Because that is what we do: we cushion ourselves with spooky tales, told just so.  With cocoa and marshmallows close at hand.  It's not preparation--it's preservation.  xox
Posted by Lis at 11:08 AM