Something More Than Babysitting 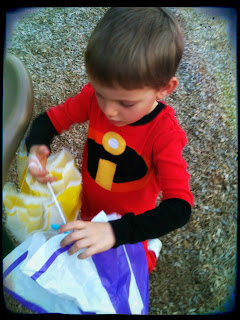 Yes, the child is out of focus here and below.
He was moving more than you might imagine to look
at this, and it turns out I'm not so good at catching
fast-moving kidlets with my phone camera.

Last night, Lis and Troy both had work-related commitments, so I’d eagerly agreed to spend a few hours hanging out with Penn.

After dinner, we gathered up some plastic bunnies with parachutes and set off for the park with them. Penn explained to me in great detail how you have to climb to the very highest point on the play structure, and then drop the bunnies just so, allowing their parachutes to fill with air and ensuring a good jump. He decided we should take not only his bunny, but the second one—the one his mom and dad use—because it’s better to have a second one, in case one person wants more turns. Because sometimes, sharing just isn’t the most fun you can have, you know?

He asked me if we could stop by his friend’s house to see if she could go to the park with us. So we wandered down to the co-housing community where she lives, the community that Lis and Troy and Penn are also a part of, though they don’t technically live in the community.

Of course, it didn’t take us long to run into someone we know. Because Lis often invites me to join community meals at the common house (and because it’s the kind of place where everyone and their goldfish belongs to the food co-op Lis and I both work for), I’m familiar to many of the members. And Penn, of course, is well known and loved.

So we stopped and chatted. And then we went and knocked on Tatum’s door. It was close to bedtime for her, but she and her mom came outside to spend a few minutes with us before Penn and I walked on to the park. Brie and I chatted and the kids ran around, giggling madly as they pretended to sneak up on us and poke us in our backs. We would break the conversation to feign shock, the kids would run away, and we’d go right back to the conversation.

Once we’d walked our friends back to their house to get ready for bed, we turned around to see another friend, Amy, across the walkway, going to visit Holly at her house. We all greeted one another warmly, and as we chatted, Holly heard us and called hello to us out her kitchen window.

It was pretty much exactly as blissfully warm and community spirited as it sounds, and what really struck me was this: Not one person even asked why Penn and I were hanging out, or where Lis and Troy were that evening. It seemed as if everyone found it entirely normal that a loving, non-parental grown-up would be out and about in the neighborhood with her four-year-old friend on a spring evening.

Eventually, Penn and I wandered on. We climbed the play structure exactly as Penn had described to me, and we dropped the bunnies from the great height, and their parachutes filled with air to help them land safely. 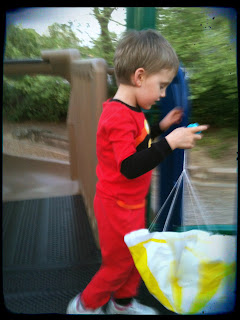 And then it was getting later, and Penn was yawning, and a tired-whiny note was starting to enter his voice. And I knew just how he felt, so I picked him up to carry him home. The night air was cooling, and his little body was warm and solid as he leaned into me and put his head on my shoulder. We walked several blocks that way, in silence, until my arms couldn’t take it anymore, and I put him down and we held hands the rest of the way home, through a neighborhood where everyone knows us.
Posted by Amy at 9:42 PM